Dan Olson, who usually does thinkpiece videos about movies and stuff, posted an absolute unit of a video explaining pretty much everything you could possibly need to know about NFTs and why they are terrible:

I'll save you the trouble of sitting through a two hour lecture and sum up the important points, or at least the ones that support the thesis statement contained in the thread title:

So this happened. Some dudes set up a thing that mints NFTs of Magic: the Gathering cards, for people who want to play the game online in a way that incorporates the same artificial scarcity as the physical card packs. (I've mentioned before that I think CCGs are already a form of gambling the same as lootboxes in video games and should be stomped into dust for the same reasons, but anyway...) The thing is, this was done without any authorization from Wizards of the Coast, nor any intention of giving them a cut. The inevitable happened. 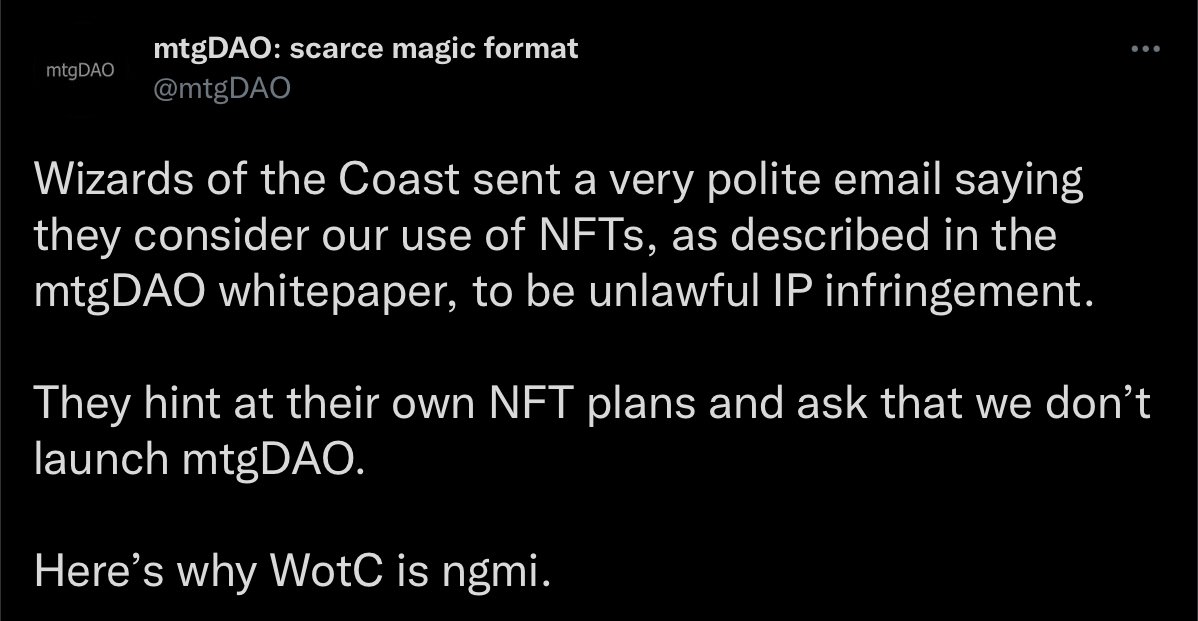 The sheer arrogance of using "ngmi" (short for "not gonna make it") in this way is hilarious. "A billion dollar megacorp is going to fail because they refused to get on board with MY crypto scam that they weren't making any money from."

It's becoming increasingly clear that NFT-bros aren't merely confusing NFT ownership for IP rights, they consider it a replacement for it, one that shortcuts the pesky business of having to actually pay something to the actual creators (even if it is usually a pittance compared to what they stand to gain) in return for having the right to use their work. Crypto is just another anarchist scheme of dealing with laws they don't like by just... straight-up breaking them in broad daylight and asking the powers that be "And just what the fuck are you gonna do about it? I'm behind seven proxies!"
Every jumbled pile of person has a thinking part that wonders what the part that isn't thinking isn't thinking of...
Top

If Penny Arcade is telling you you're making a mistake it means you really screwed up.

And when Tycho's ramblings on the subject start to sound wise:


I'm genuinely starting to think the Internet is bad, and not because of minting or mining or any of those things. I'm starting to think it's bad because it allows for groups of people to manufacture consensus without any checksum from external stimuli. Let me put that another way: I think it is bad, bad here meaning actively dangerous, to construct a wholly local reality. That sort of thing works well, really well, until it doesn't.

Weird that it's taken him this long to figure that out, though. Or that this is the first time he's felt compelled to say it out loud.
Every jumbled pile of person has a thinking part that wonders what the part that isn't thinking isn't thinking of...
Top
Post Reply
6 posts • Page 1 of 1