Twilight realizes she never returned a book to the Canterlot Library, and besides incurring the disgrace of a super-overdue book and huge fees, she may have caused her favorite librarian to lose her job.

This thread is for discussion of the episode. This episode airs at 11:30 Eastern / 8:30 Pacific on Saturday, April 27!

Official preview clips and images are okay to post, as is speculation about the episode. 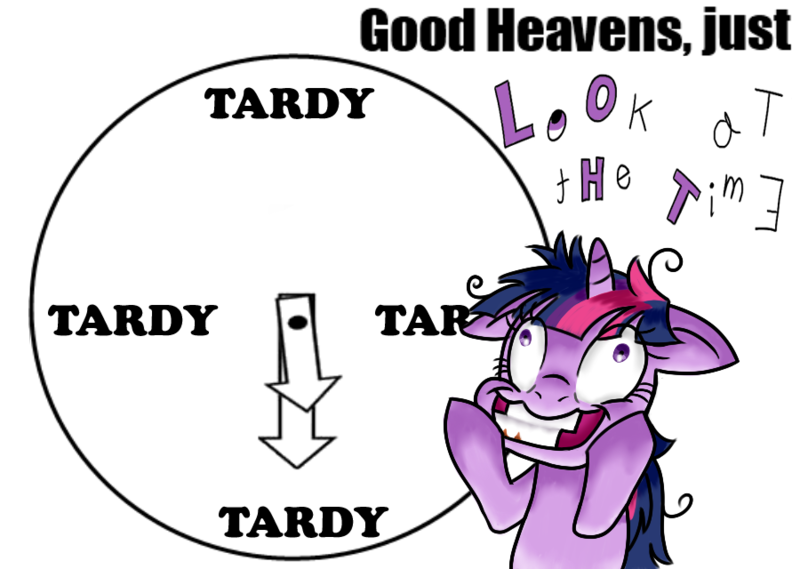 Tardy to the extreme
"The knack of flying is learning how to throw yourself at the ground and miss." - Douglas Adams
Top

Just like I expect of Twilight, this episode's title is (likely) made up to be a much bigger problem than it really was.

You know, Ms. Sparkle, I've worked at this library for 44 years. I was eligible for retirement 3 years ago. Do you know why I stayed?

You learned to eat books?

You're a horrible little Pony, Twilight. I kept this job for one reason. I knew I'd nail you and I did. Pat Garret got Billy the Kid and I finally got you. My job is over. Today is my last day. You know, it's funny. I could've given you amnesty on the book. I would have for anybody else. But I always hated you. Is it wrong to hate a nine year old mare? No. Not when that mare is you. It's the joy of my life to see you grow up like I always knew you would -- a total and complete loser. Today, when I get in my car and leave this place for the last time, I will be whole. Your shame is my gold watch.
Top

Spike, the moment has come.

You know the protocol — I need the authorization phrase.

My child, it is forbidden for you to interfere in pony history.

Sister, are you going to stop her or are you just going to sit there chanting “It is forbidden”?

Don’t you rob me of my Brando moment.

I'm ready for some TWILEYNANAS

That's right.
But...
This one's too young
Top

Your MRI results have shown total infection to now be approximately one fifth of the full mass of the tissue.

Your brain is about 20% tumor.

There was a link here, it's dead now and I'm sad.
Top

That was a cute and fun slice of life episode.

But it felt like a story that would have fit better 4 or so seasons ago.
Top

I thought it was a decent episode. Spike was pretty good, nice to see him still keeping things on track.

I liked the Derpy and Moondancer cameos.

How bout how good it feels to finally forgive you

I agree.
But...
This one's too young
Top

I doubt that this would have been better off much earlier in the show's run. This story was a powerful contrast of Twilight Sparkle past and present, of Twilight the manic scholar vs. Twilight the cool-headed leader. A huge part of her journey has been her learning how to take action even with imperfect information or operate in a situation that's not completely on her terms. Had she been confronted with this aspect of her past at some point somewhere between seasons 1-5 or so, I feel it would've come off as just her normal behavior, but since she'd had time to grow up it matters that much more to see her move past what once was so incredibly important.

As someone who used to have my own, dedicated shelf for incoming books at the local public library, I could identify with Princess Twilight Sparkle in this one.

It was a fun and well-executed episode, which ratcheted up the dramatic tension most hilariously. "Because of the Shame", indeed.

It seems a long time since we have had a good lesson episode, and this was even a really apropos one for Princess Twilight Sparkle.

Sparks continues to be best sperg. There can be none more sperg. A shame we didn't get a Marsala cameo in her own restaurant though. Her design was so good.
Top

I just about died in the cold open with the 'G1 Star Swirl Figure' gag, though, since I'm a toy collector.

This was a really nice episode with a good moral that I think a lot of us can relate to.

Nothing in-depth to say, although during the scene where Twilight goes to Dusty Page's old home, the stallion who moved in mentioned "Silver Surfer" while trying to remember where she moved to.

Also, he has a "No Free Literature" sign. There are Pony Jehovah's Witness

In this vein I also couldn't help but notice Twilight's reference to the Divine Comedy.

My “Let’s Watch a Ponies And See What Happens” reaction post.

• We appear to be getting a lot more Spike-burps-a-letter this season. And more Spike in general. These are positive changes. (Spike eps are not always my favorite but he’s been pretty great this season.)
• Do library books still have those little pockets with the checkout cards? It’s certainly how I remember it, but I’m an old.

• Man, and I thought Fluttershy was into guilt trips.
• Twilight got a whole library blown up on her watch. If she avoided Library Jail for that I’m sure she can survive this.
• because of the SHAME
• Moondancer, hell yeah this episode just gained another star.
• Relax, Twilight, Dusty was probably just an embezzler or something normal like that.
• Dusty had her over for tea? I guess she was another of Twilight’s Canterlot not-quite-friends.
• I bet Bojack’s mom lives down the hall.

• I dunno why, but watching Twilight’s expectant smile melt away is hilarious to me.
• Pony windsurfing. I think I really have seen everything!
• Dusty does seem happy, but there’s clearly an unhealed wound there.

• In Amending Fences, Twilight’s old friends were either totally no-sweat with her leaving for Ponyville or (in Moondancer’s case) super pissed. No middle ground. Maybe Dusty is in the middle, though.
• Ha, and she never even read the MacGuffin.

I like the tone of this one! It’s a story about Twilight freaking out but it doesn’t resort to Lesson Zero craziness. Twilight’s pretty normal and relatable through this.

While I was out running errands today I started nitpicking a detail from this episode. 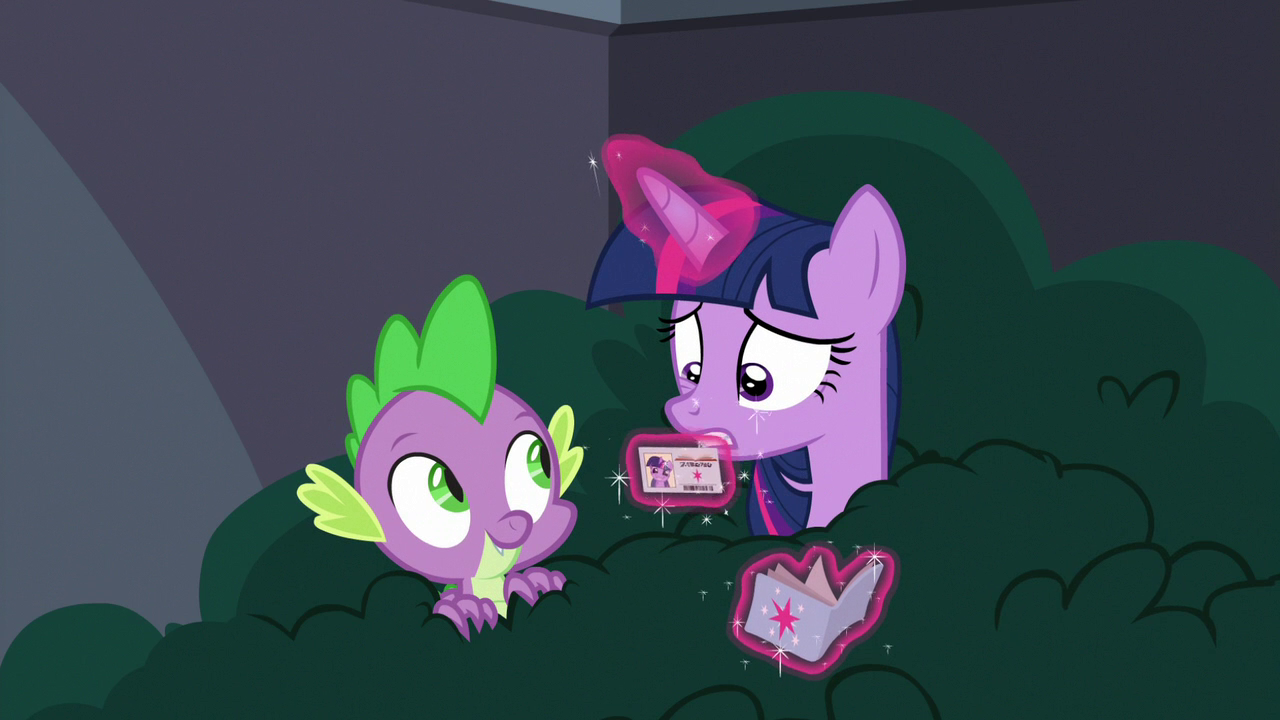 Doesn't it seem a bit impractical for Twilight Sparkle to have a wallet? I wonder if the stage direction in the original script specifically described her pulling out a wallet and taking her library card out of it, or if it just specified that she showed Spike her library card and the specifics came together in storyboarding. I feel like writing her as having a wallet would be incredibly easy given that it's a very mundane object that nearly all of us have, so it wouldn't feel strange until you consider that Twilight doesn't normally wear any clothes with pockets where she could keep the wallet, something that might be easy to miss when writing but a bit more obvious when drawing.

She could keep it in the saddlebags that she was wearing in this scene, but normally I figure she'd get the card straight out of the bag; in this case, since she and Spike were hiding in the bush, the wallet might have been a necessity since to grab it otherwise would look like she dug the card out from within the bush itself. The wallet being embroidered with her cutie mark also makes it more clear in this regard that it's hers, yet still begs the question of if she uses this wallet enough to where it was worth getting one custom-made (even though accessories customized this way are very common in Equestria). I mean, Equestrian bits are still predominantly exchanged in coins and not notes, so it's not like she'd have her cash in there!

These things are stored in Pony Hyperspace, which is also where the party cannon is kept.

So when Twilight was looking for the librarian, she went to a bunch of places with Silver in the name... and also talked to the students. I was a little puzzled by that but it went by so quickly in the montage that I didn't think about it too much. Then later I realized oh wait she was asking Silverstream! That was a clever little joke.

This episode had a very nostalgic feel to it, like Amending Fences. Which made the Moondancer cameo all the more fitting.
Top
Post Reply
25 posts • Page 1 of 1